‘Together, we can tackle child abuse’ - new national campaign

The Council is supporting a national campaign launched on 3 March by the Department for Education to encourage members of the public to report child abuse.

The campaign’s main message is that if you’re worried about a child or think their safety might be at risk, then it is important to tell someone. You don’t have to be absolutely certain about whether a child is being abused; if you have a feeling that something’s not right, talk to your local children’s social care team who can look into it.

Everyone has a role to play in helping to protect children. All children have a right to be safe and should be protected from all forms of abuse and neglect.

It is not just up to social services, doctors and the police to spot the signs of abuse and neglect. It is important that we all look out for children and young people within our community who may be experiencing abuse or neglect. Members of the public, and particularly other parents, are in a unique position to spot concerns among children with whom they have contact - which may not be apparent to professionals.

Some of the signs of abuse or neglect include changes in:

If you suspect child abuse or neglect, please click on the button below. 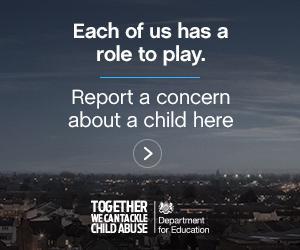 Never give up, Encourage others, Do your best!
Top

Unfortunately not the ones with chocolate chips.

Some cookies are necessary in order to make this website function correctly. These are set by default and whilst you can block or delete them by changing your browser settings, some functionality such as being able to log in to the website will not work if you do this. The necessary cookies set on this website are as follows:

Cookies that are not necessary to make the website work, but which enable additional functionality, can also be set. By default these cookies are disabled, but you can choose to enable them below: